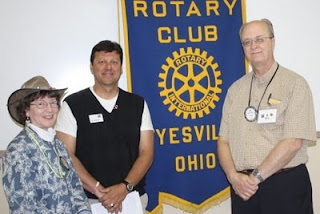 Events:
Tim Callahan from the Guernsey County American Cancer Society (ACS)spoke to the club about the activities and services ACS provides to Guernsey County residents who are cancer patients, cancer survivors, or caregivers.

The ACS was founded in 1946. Since that date, ACS has raised over $14 billion to support research for better treatments and for a cancer cure. ACS has provided funds supporting 44 different Nobel Prize winners.

Currently, the Guernsey County ACS is preparing for its annual Relay for Life which will be held at Meadowbrook on June 18-19. The Relay began in 1981 when Gordy Clapp decided to spend 24 hours walking or running as a way of illustrating that cancer never sleeps.

Since the first Guernsey County Relay thirteen years ago, local volunteers have raised about $700,000 for cancer research and for the support of services offered to local cancer patients. In the last two years, volunteers have raised over $100,000 a year. In 2009, the Guernsey Relay was given special recognition as a “Club Relay.” This award recognizes the top 50 Relays in the state of Ohio. One of the Guernsey County teams--Detroit Diesel--was recognized as on of the top 50 teams in the state.

In other business, The club members voted to donate money to send the Rolling Hills 5th graders to the John and Annie Glen Museum.

The club will hold its first chicken BBQ of 2010 on May 8. Volunteesr to work are needed. The BBQ will be held at the rotary Gazebo in Byesville at the corner of Main and 2ed. Chickens will be ready for sale about 11:00am. Sales will continue until the BBQ’ed chickens are gone.

Applications for the club’s scholarships have been received. The scholarship committee is in the process of reading the applications. The committee will meet after the May 4th meeting to select the students who will be interviewed for the scholarships.

The club’s next meeting will be 7:30 am, May 4, at the Stop Nine Senior Center at 60313 (GPS use 60299) Southgate Road, Byesville. Anyone interested in learning more about the Byesville Rotary can call Membership Chairs Marty Patchen, 740-685-3828, or Larry Miller, 740-439-2767. More information about the Byesville Rotary can be found at: www.Byesvillerotary.blogspot.com
Posted by Ess Sea at 7:45 PM No comments: 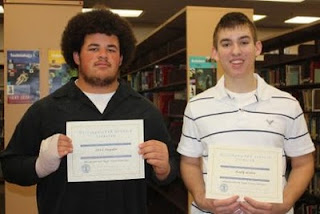 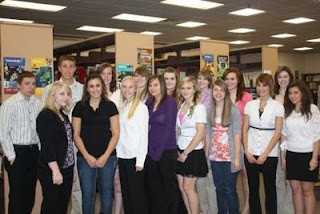 To qualify for membership, students interested in joining Interact were required to attend all Interact meetings held during the school year. They were also asked to volunteer as workers at two Rotary sponsored events such as the chicken barbeques or the Christmas food basket program. Rotary members were able to meet most of the new inductees at these work events.

Interact Clubs are Rotary’s service clubs for young people ages 14-18. These clubs are a good opportunity for students to get involved in community service and to get acquainted with local business and community leaders. The clubs are sponsored by a local Rotary making them true “partners in service” and key members of the Rotary family. The Meadowbrook club is the only Interact Club in Guernsey County.

Pictured: Chuck Fair, Speaker Host; Darrin Lautenschleger Public Affairs Administrator, JWCD; Joe Waske, Pres. Elect.
No readings for next week. Special meeting at:
Meadowbrook High School Library for Interact Induction at 7;30 am.
Donates and coffee.
Darrin Lautenschleger, Public Affairs Administrator of the Muskingum Watershed Conservancy District (MWCD), spoke to the Byesville Rotary about MWCD goals in the coming years. Established in 1933, MWCD’s original goals were to reduce loss of lives and property by creating a system of dams and permanent lakes or reservoirs within the 18 counties forming the district.

Currently, The MWCD is responsible for 14 reservoirs and dams. It partners with the Army Corp of Engineers to develop and maintain the dams. It functions as a political subdivision of Ohio. The MWCD is the largest conservancy district in Ohio.

The system of dams and reservoirs developed over 70 years ago is beginning to show its age. MWCD is developing plans to maintain and repair different elements of the system. In addition, MWCD is working to solve problems associated with sedimentation, erosion and water quality.

Failure to maintain the system of dams and reservoirs can have significant economic consequences. The U.S. Army Corp of Engineers estimates that the MWCD flood control system saved about $475 million in property damages during 2004. In addition to preventing serious flooding, the lakes in the MWCD attract 5.5 million visitors every year who spend money at local businesses.
The club’s next meeting will be 7:30 am, April 20, at the Meadowbrook High School Library. Anyone interested in learning more about the Byesville Rotary can call Membership Chairs Marty Patchen, 740-685-3828, or Larry Miller, 740-439-2767.
Posted by Ess Sea at 3:15 PM No comments: 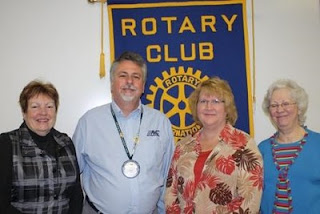 Phyliss Jeffries reported that the club’s Breakfast with the Easter Bunny served doubled the number of people served compared to last year.

The club’s next fund raiser is their Annual Golf Outing which will be held on Sunday, May 2, 8:00am at Wildfire in New Concord. Club members are recruiting 3 person teams. Fees are $55 per person. Lunch and cash prizes are included in the fee. Monies raised by this fundraiser will support scholarships given by the club to Meadowbrook High School seniors.

The health screening the club co-sponsors with SEORMC will be held April 30. Appointments are required. Call 740-435-2900 beginning April 19 to schedule an appointment.

Club members began planning for their first chicken BBQ of the season. A tentative date has been set and volunteers are needed to work.

The club’s Interact club will hold its induction ceremony Tuesday, April 20, 7:30 am at Meadowbrook High School. This event will take the place of the weekly meeting. Members are encouraged to attend in support of the students participating in this group.
The club’s next meeting will be 7:30 am, April 13, at the Stop Nine Senior Center at 60313 (GPS use 60299) Southgate Road, Byesville. Anyone interested in learning more about the Byesville Rotary can call Membership Chairs Marty Patchen, 740-685-3828, or Larry Miller, 740-439-2767.
Posted by Ess Sea at 9:07 PM No comments: