Greg DiDonato spoke to the Byesville Rotary about services provided by OMEGA (Ohio Mid-Eastern Governments Association). Currently, OMEGA is actively involved in getting government stimulus money directed to Guernsey County. The agency provided data to the Governor’s office and lobbied for the Appalachian Region in Washington DC. As a result of this work, $8 million will be invested in 3 water projects in Guernsey County.

OMEGA has also written a successful proposal which will improve broadband in the Guernsey County area. The agency submitted a broadband infrastructure development plan to NTIA. This was the only plan submitted by Ohio that was endorsed by Gov. Strickland. Over the course of the next 3 years, $83 million will be invested in broadband infrastructure in a 34 county area which includes Guernsey County. DiDonato expects this project will increase broadband availability by 22%.

OMEGA’s mission is to facilitate cooperation between federal, state and local agencies to provide economic and community development opportunities. OMEGA typically distributes about $2.5 million per year to its 10 county service area. The agency focuses on water and sewer projects, economic development, but heath and wellness programs, Headstart, and technology for tech colleges are also funded.

OMEGA helps members of the community and local business write successful grants by offering grant training and grant writing resources. OMEGA also supports local business development though its Revolving Loan Fund Program which provides below market rate loans to businesses in conjunction with a bank. This funding provides a bridge to full financing of a project when a business cannot get 10% of the project funded by a bank.

The club’s next meeting will be May 5, at the Church of Christ Stop Nine Golden Sixties Building. The meeting will be a joint meeting with the Cambridge Rotary. Anyone interested in learning more about the Byesville Rotary can call Membership Chairs Marty Patchen, 740-685-3828, or Larry Miller, 740-439-2767. 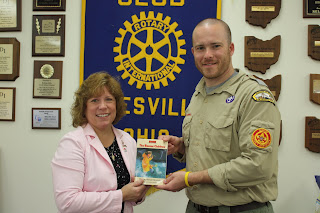 Pictured: Christina Morris, Rotary President, Jeff Wickerham, Senior District Executive of the Boy Scouts of America.
Readings for next meeting: April Rotarian, "By George, They've found It," p. 16, and "Four-Way Test Kicks off Serious Discussion," p. 19.
Jeff Wickerham, Senior District Executive of the Boy Scouts of America, met with the Byesville Rotary on Tuesday to share local plans for celebrating “100 Years of Scouting.” 2010 will mark the 100th birthday of Boy Scouting. Wickerham is chair of the committee planning a year long celebration to mark the event.
Local birthday celebration plans are in progress. The celebrations will begin the summer of 2009. Events will include an Eagle Scout Gathering to honor and recognize Eagle Scouts living in Cambridge-Byesville area. Additional activities include a Tree Planting Event planned for Arbor Day, a Patch Program, a 10 Commandment Walk organized in cooperation with local churches, a Blue and Gold Banquet with all packs, troops, and crews.
Activities will culminate with celebrations at the 2010 National Jamboree in July 2010. Thirty-six local scouts and 4 adults will attend this event with 40,000 other Scouts from across the country.
The National Boy Scout Office is sponsoring a “Hall of Leadership.” One Scout will be chosen to represent each Scouting District. Nominations will open in February, 2010. Anyone can nominate a Scout who has affected the lives of other people.
The Muskingum Valley Council is looking for all Scouts and former Scouts. Contact the Scouts at 453-0571.
In the Cambridge/Byesville area, 625 young people are involved in Cub Scout and Boy Scout programs. At 340 members divided into 13 troops, the Cub Scouts, for boys in grades 1-5, are the largest group.
The Boy Scout program includes 11 traditional Boy Scout troops designed for young people 11-17 and two special interest programs. The Venturing program is coed and open to ages 14-20. This group is a high action group aimed at adventure such as rock climbing and rafting. The Explorer program with about 100 coed youth members, for ages 14-20 and designed to explore careers.

The club’s next meeting will be April 21, at the Rolling Hills Schools Administration Building. Anyone interested in learning more about the Byesville Rotary can call Membership Chairs Marty Patchen, 740-685-3828, or Larry Miller, 740-439-2767.
Posted by Ess Sea at 3:51 PM No comments: 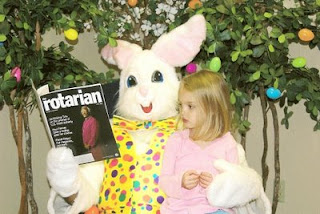 Readings for next meeting: April Rotarian: "By George, They've Found It," p. 16, and "Four-Way Test Kicks Off Serious discussions," p. 19.
About 30 local kids met Harvey, the Byesville Rotary Easter Bunny, at breakfast on Saturday. Every child attending breakfast had the opportunity to meet the Easter Bunny and receive an early Easter surprise. Free pictures with the Bunny were given to each child. Over 70 adults accompanied their kids to the breakfast. The Byesville Rotary was pleased with the number of people attending their newest fundraiser. Monies raised at the breakfast go toward Byesville Rotary projects such as scholarships for local high school students and their Christmas Food Basket program.
Posted by Ess Sea at 3:40 PM No comments:

Breakfast with the Easter Bunny and the Byesville Rotary 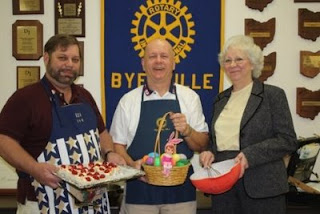 Richard Dair, a Rotary member, is head chef for this event. He and his assistants will be cooking up a delicious breakfast of hot pancakes, sausage, and eggs served with juice and coffee. The breakfast is $5. Children under 5 eat for free.

A big Easter bunny named Harvey will be at the breakfast. The bunny is looking forward to meeting lots of kids and having his picture taken with each child attending the breakfast. The pictures are free. Photos will be taken by Allie Beros.

Children will get an Easter egg filled with treats from the bunny.

Funds raised by the breakfast will be used by the Byesville Rotary to support local Rotary projects which include providing dictionaries to Rolling Hills School District 3rd graders, awarding scholarships to encourage local students to attend college, and providing Christmas food baskets.

For more information about the breakfast or to make a donation to this fundraiser, call Christina Morris at 740-432-1377.

The club’s next meeting will be April 14, at the Rolling Hills Schools Administration Building. Anyone interested in learning more about the Byesville Rotary can call Membership Chairs Marty Patchen, 740-685-3828, or Larry Miller, 740-439-2767. 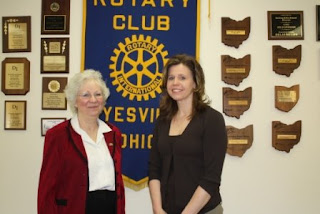 Stephanie Neuhart was guest speaker at the weekly meeting of the Byesville Rotary. She presented MRDD’s plan for meeting their budget challenges in the coming year.

She explained that MRDD revenues come from three sources-- local monies (tax levies), state and federal monies. Less than half of the monies (48% ) needed to provide services come from state and federal sources. The rest comes from local monies (39%) and 13% comes from various such as grants. Local support is a significant part of the MRDD budget.

The current economic crisis in the state and national poses long-term challenges for MRDD. The MRDD had chosen to be proactive in facing these challenges and work to insure that local monies are used as effectively and efficiently as possible in the coming year. They are enrolling more of their clients on Medicaid waivers. This action saves MRDD 60% of the cost of Medicaid services. Staff at MRDD is actively identifying federal, state and local grants with the goal of defraying maintenance and/or repair costs.

In other business—plans for the Breakfast with the Bunny fundraiser which will be held on April 11, 8-11:00am at the Stop Nine Senior Activity Center in Byesville were finalized. Registrations for the Health Fair Screening on April 24 are going well. Club members were asked to sign up to work on the chicken BBQ scheduled for April 25 in Byesville. Monies from these fundraisers will be used to support local service projects.

The club’s next meeting will be April 7, at the Rolling Hills Schools Administration Building. Anyone interested in learning more about the Byesville Rotary can call Membership Chairs Marty Patchen, 740-685-3828, or Larry Miller, 740-439-2767.
Posted by Ess Sea at 8:02 PM No comments: