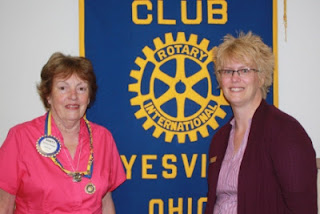 Depp explained that there are several different types of dementia including reversible dementia, frontal-temporal dementia, and dementia with Lewy bodies. The2nd most common type is vascular dementia which is caused by reduction of blood flow to the brain such as damage caused by a stroke.

The most common form of dementia is Alzheimer’s disease which is a progressive, degenerative disease which attacks the brain. At present there is no cure. Five million Americans are dealing with some form of the disease. That works out to about 1 in 4 senior citizens and their families who are trying to cope with the devastating effects of the disease.

Depp’s message to people affected by Alzheimer’s and other forms of dementia is. “You are not alone. Support is out there.”  The Alzheimer’s Association provides a 24/7 help line (1-800-272-3900) which provides telephone assistance on a 1 to one basis. The Association sponsors a Caregiver support Group that meets at the Guernsey County Senior Center in Cambridge on the 2nd Tuesday of the month. First time attendees should call 1-800-272-3900 to verify the time and date.

In July, “Living with Alzheimer’s”—an interactive program for people in the early stages of memory loss and their care –will be held in Cambridge. The program will include a discussion of what Alzheimer’s patients need to know and what type of planning they need to do.  Meetings will be held once a month for a total of 5 educational sessions.