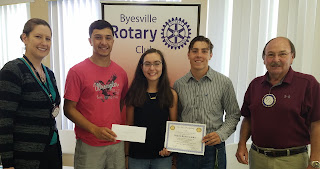 Byesville Rotary awarded $1000 scholarships to each of four students graduating from Meadow Brook High School. The scholarships awards are based on a combination of grades, tests scores, references letters and school/community activities.

Byesville Rotary club members wish these young students best of luck as they continue their educations. 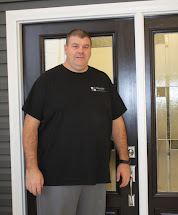 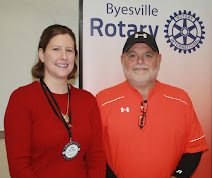 Recent meetings of Byesville Rotary featured speakers from growing business who have chosen to locate in Byesville.

Mark Broom, owner of Simple Windows and Doors, and Jeff Riggans owner of BoxDrop, both decided they needed more room, plus a parking lot, plus a loading dock. Neither felt they needed all the space offered by the former Family Dollar building. They decided to split the space and open a storefront in Byesville for their businesses.

Mark Broom stated that he got all the paperwork and licenses needed to start his business the day before the county shut business doors because of COVID. Not the most promising start, but Broom persisted.

His business did ok the first year; the second year business improved. Response from the community has been good. COVID did not prevent people from needing new windows and/or doors and the remodeling services that went with replacing old windows and doors. Broom is currently constructing a showroom inside the store front to showcase the products he sells. Broom is looking forward to increasing business in his third year.

Broom offers ProVia doors produced in Sugarcreek, Ohio, and Sunrise windows produced in Michigan. At present, he employs a total of five people. More information about his business and pictures of his products are at info@simplewindowsdoors.com .

Jeff Riggans, owner of BoxDrop, sells mattresses. He has lots of ties to Byesville and has been in the furniture business since 2010. Riggans stated, “I started small and began selling out of 3 storage units—one held inventory, one served as a sales room, and one held other supplies.”

Riggans pointed out that he did well and within a year moved to a different location. His second move was to the old Family Dollar store which he uses as a warehouse. He considers his business to be a discount clearance center/warehouse. Riggans explained his warehouse may not be pretty because he focuses on keeping his overhead low so he can pass savings on to his customers. He is proud that during the first 5 years, he did not increase prices despite COVID.

Riggans began business offering Corsicona mattresses which are produced by the largest mattress company in the world. Recently, he announced he will be adding Nectar and Beauty Rest models. He also announced that beginning January 8 through May 7, he will have open hours 9:00 am to 2:00 pm on Saturdays. Appointments arranged all other days and times.

Riggans reported he was pleased with the response to his new mattress outlet. More information about DropBox if available at https://boxdropbyesville.com/ or on Facebook under DropBox Byesville or at 740-584-2623.