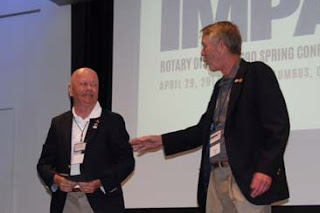 At the monthly club business meeting, Chuck Fair, club president, announced to club members that Byesville Rotary was presented with the Governor’s Award for Public Image Initiatives at the Rotary District 6690 annual conference. Byesville Rotary was one of three clubs out of 59 Rotary clubs in District 6690 that were recognized for this achievement. Governor’s Awards, were also presented to clubs in the areas of Community Service, World Service, and New Generations (involvement with Rotary’s youth service groups Interact and Rotaract).

These projects are supported by fundraisers such as the club’s signature summer chicken BBQ’s, an annual Scholarship Golf tournament, Breakfast with the Easter Bunny, Breakfast with Santa, and Stuff Santa’s Stocking.

Golf tournament chair, Larry Miller, reminded club members to make room in their schedules to serve as volunteers at the Scholarship tournament to be held Sunday, May 7. He stated that, “It is not too late to have a fun-filled day playing golf without any guilt because this play is for a good cause—education.” He went on to say that it is still not too late to register for the tournament or to make a donation toward the scholarships. For more information see the club’s Facebook page—ByesvilleOhioRotary.

Chuck Fair reminded members to save time to spend an hour at the club’s first chicken BBQ of the summer to be held on Saturday, May 13.  As usual the club will be BBQ’ing at Rotary Park at the corner of Main and 2nd Streets in Byesville. This year the club will share space with the Byesville Farmers Market. Dates of the remaining BBQ’s are available on the club’s Facebook page.

Connect with #ByesvilleRotary at: www.Byesvillerotary.blogspot.com , Twitter Byesville_Club, or Facebook https://www.facebook.com/pages/Byesville-Rotary/256548047818283. The club meets 7:30 am, Tuesday at the Stop Nine Senior Center at 60313 (GPS use 60299) Southgate Road, Byesville. Walk-ins are welcome at the club’s meeting. #6690